In its early form, English Sporting usually presented the shooter with two different targets. The targets used were normally quartering targets, crossers, driven, overhead, rabbits, springing teal amongst others the course creator might feel is challenging. Today, as the most popular form of clay shooting, English Sporting provides a shooting environment that offers different layouts and a constant challenge.
The targets can be launched as singles or pairs. The pair would consist either of one target, then the second being launched the instant a shot is fired or both targets fired at the same time.

How is it Shot

An average competition may comprise of around five stands used to shoot around 30 targets. Differing variations allow more targets and stands to be used and in a large competition there may be as many as 12 different stands and 100 targets. (Please note Mendip always shoots 50 or 80 targets and the number of stands may vary). 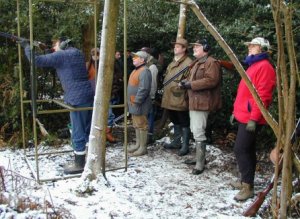 There is no set way of selecting stands and shooters can select in a random order if they wish. However squadding is sometimes popular with fixed shooting times, a pre-determined order relates to what order stands should be used, this is used mainly when shooting in large competitions. The shooter has an option to call for the target with the gun in or out of their shoulder.

It is simply a matter of how many targets have been broken and each shooter has the responsibility of carrying their own scorecard. This card is presented to the referee (or scorer) before the shooter takes to a stand.

A suitable sporter would normally consist of a 28" or 30" barrel with a multi choke. However a 32" tube can be more helpful with the more distant clays as it steadies the gun more. A fixed choke gun would normally be choked a quarter or a half. It should be noted that a sport gun has to be very adaptable with good manoeuvrability, improving the handling characteristics to help with the variety of different targets encountered
It would be in the shooters best interests to carry a selection of size 7.5 to 8 for mid-long distant targets and size 9 skeet's cartridges for the close targets. Plastic wads could be beneficial if rules permit. The heaviest load is 28gr.